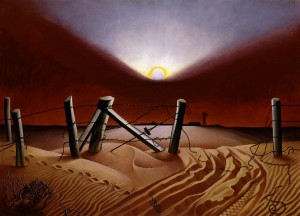 “The nation behaves well if it treats the natural resources as assets which it must turn over to the next generation increased, and not impaired, in value. Conservation means development as much as it does protection.” – President Theodore Roosevelt, 1910

Beginning in the early nineteenth century, the wild aspect of the American wilderness began to take on national and spiritual meaning for Americans. In this evolving attitude, American artists, together with authors and philosophical pundits, played a major part. By mid-century, differing concerns of science, religion, and art all came to focus on landscape, and the natural environment became a major symbol for modern man. It stood for opportunity and discovery, whether geological, aesthetic, and theological, or simply economic. We see these concerns in the literature of the era, the struggle between man and nature exemplified in novels like Herman Melville’s Moby Dick.

The entanglement of these varied interests provided unprecedented sponsorship for art in America, encouraging a school of landscape painting that effectively fed the desires on which it thrived. Several artists made significant contributions to the national-park movement, such as Thomas Moran, whose painting The Grand Canyon of the Yellowstone strongly influenced public opinion towards the establishment of Yellowstone National Park.

Between the artist, conservationist, and author, there has always existed a remarkable similarity of thought, a community of interest based upon a deep respect for nature. The profound environmental concerns of our day reflect a growing acceptance of the artist-conservationist view of the sacredness of the land.

Click on an artwork to learn more about how that artwork connects to the theme of Humans and the Environment. 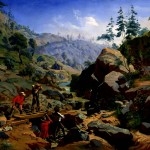 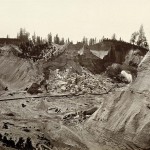 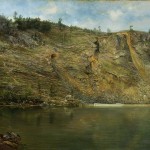 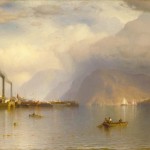 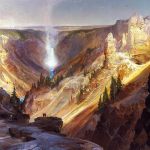 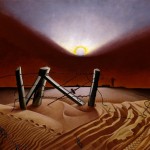 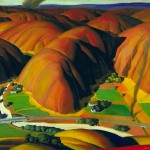 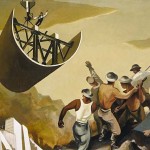