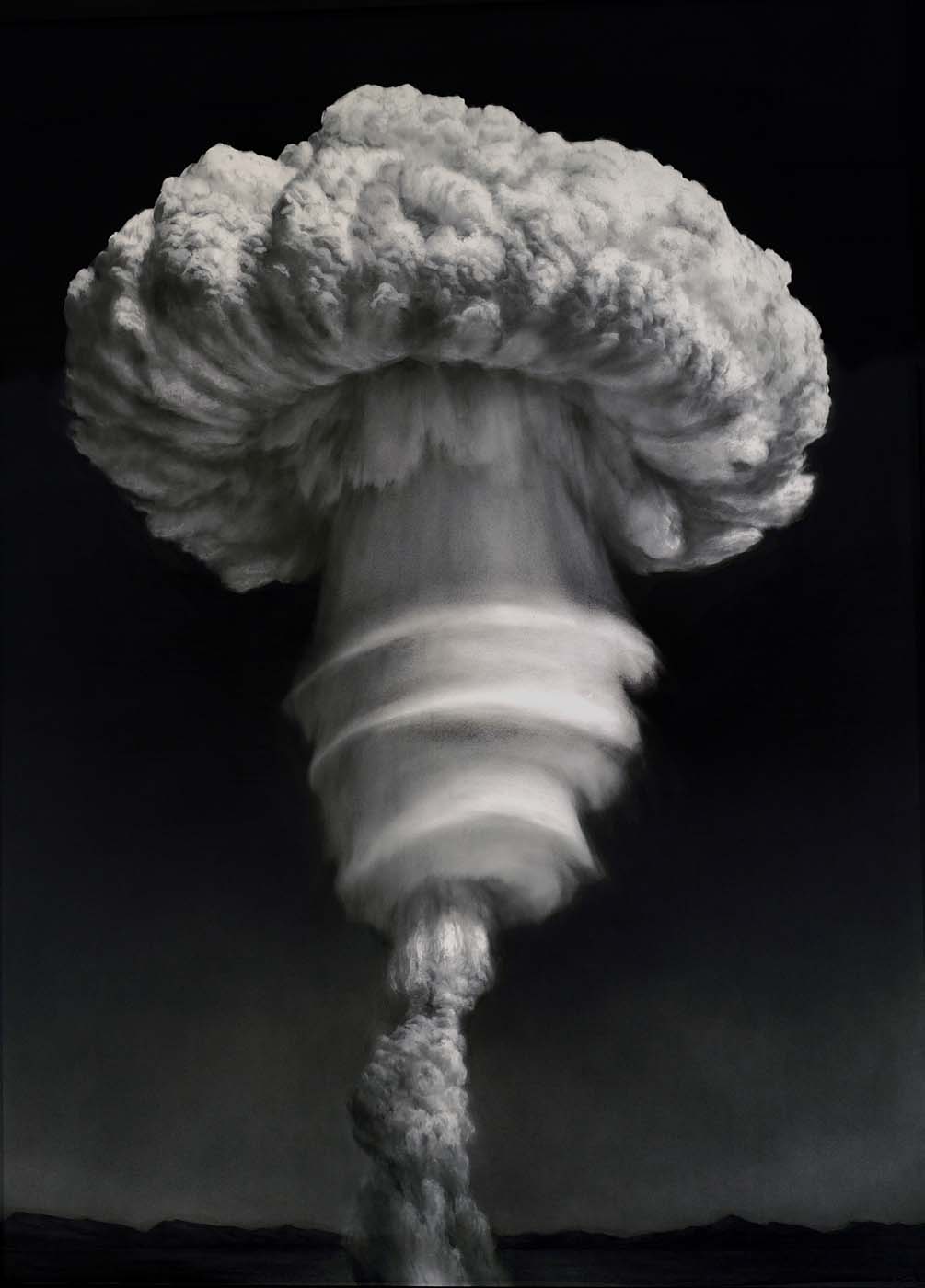 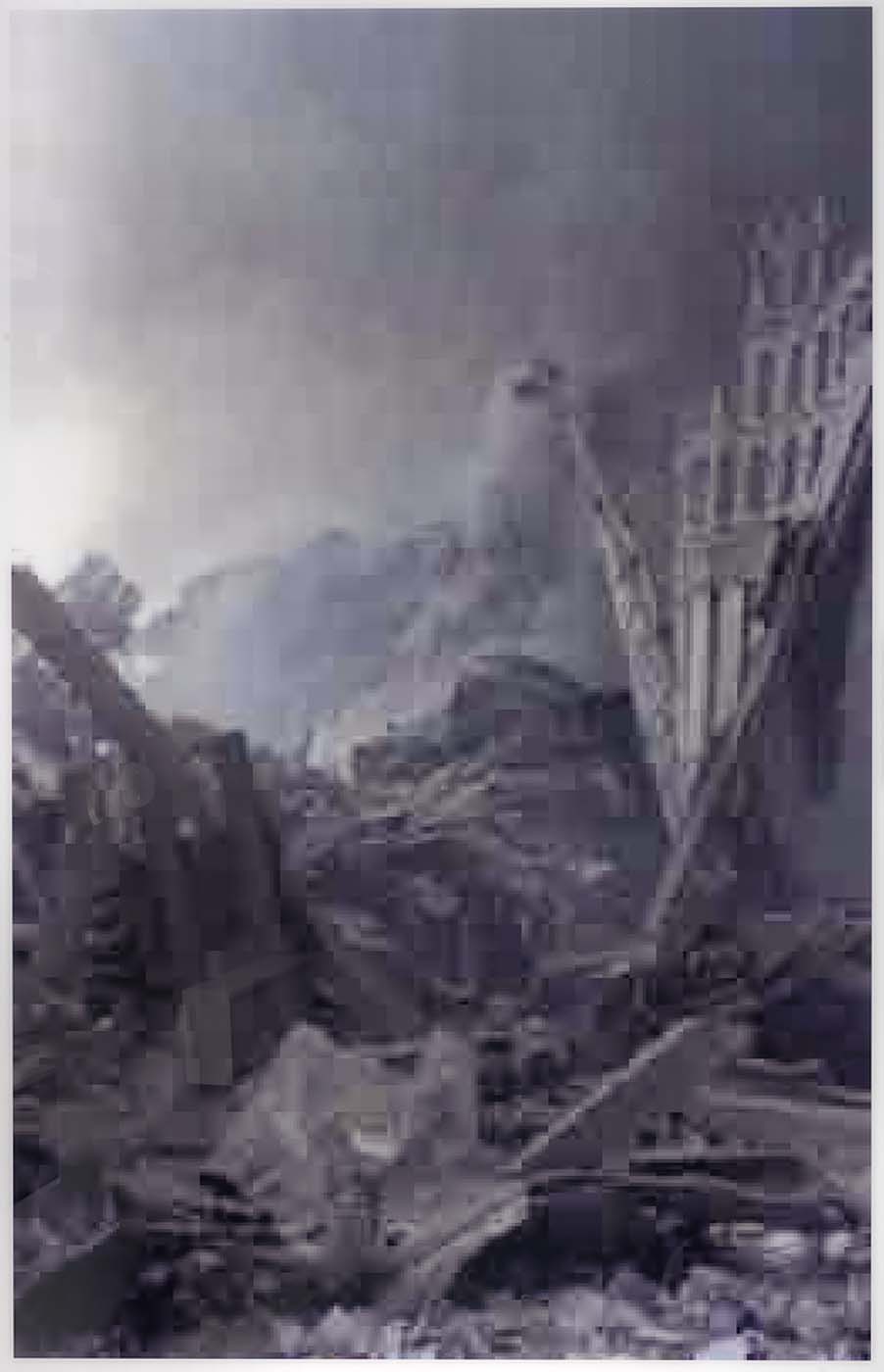 During the Cold War era, the United States and the USSR engaged in a nuclear arms race for supremacy in nuclear warfare. The image artist Robert Longo has rendered seems at first like a beautiful swirling mass, but to those who lived in fear of nuclear war during the Cold War era, the image is an all too familiar reminder of the constant fear that permeated their lives and the power and devastation that atomic weapons cause. The sustained state of military and political tension during the Cold War spilled over into the lives of everyday citizens. In fact, the artist himself grew up in a time where duck and cover drills in school were common. But he was prompted to create his series of images of atomic blasts decades later, after one of his children viewed a photograph of an atomic mushroom cloud and commented that it looked like a cloud or a tornado. This image is based on an archival photograph of the first Chinese hydrogen bomb test in 1967. Similarly, artist Thomas Ruff has taken a pixelated image of rubble and enlarged it to the point that the pixelation of the digital image supersedes the recognizability of the image as a photograph. It is only as we look closer that we realize that we are seeing the remnants of the Twin Towers in New York, destroyed by a terrorist attack on September 11, 2001. The image is meant to be horrifyingly beautiful, but also serves to remind us of events and images that were seared into our memory that day and entered into our collective consciousness.

Excerpt: “One of my friends came in to warn me that I must be prepared for an atom bomb. She was at a Red Cross meeting where they talked of nothing else. The time is set for some time in March, but where they got their information she couldn’t say. I said I did not believe it and anyway what could I do about it beyond praying that it would kill me outright. My friend said that I could at least keep a bag packed and have some money on hand. That is what she is going to do. She met a man in Mexico this summer who insists that the bomb will be dropped in November. He said Stalin is getting old and that naturally he wishes to conquer the world before he dies. He will begin his campaign in November because the Germans cannot get into Russia in the winter. Evidently there are those who believe all that stuff but I am a skeptic as well as an optimist, and refuse to be worried.” 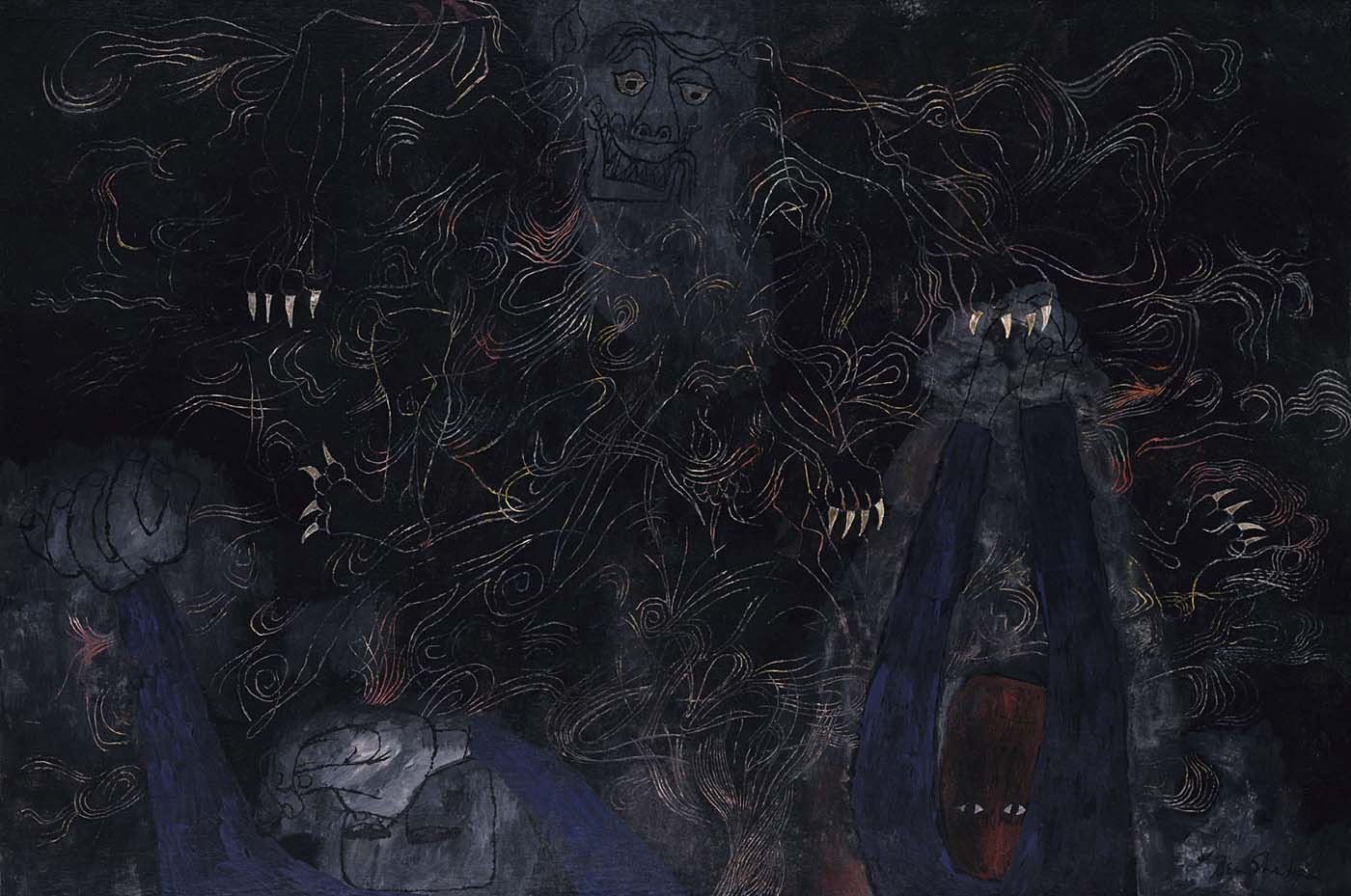 This work by artist/ peace activist Ben Shahan is part of a larger series which explores the story of the crew aboard the Japanese fishing boat Lucky Dragon. The crew was exposed to a shower of radioactive debris from an American hydrogen bomb test in the Pacific Ocean, on March 1, 1954. All twenty-three crew members died of radiation poisoning. Shahan strongly opposed the use of nuclear weapons, and this series is his reaction to the tragic Lucky Dragon story. The incident strained relations between the U.S. and Japan and began a worldwide debate over the use of nuclear weapons. The scene in We Did Not Know What Happened to Us depicts the moment of the bomb’s impact. An apocalyptic beast with bared teeth and multiple clawed arms dominates the upper register amidst a black cloud – a representation for the bomb. Its victims are shown below, arms outstretched as one figure attempts to cover his mouth. 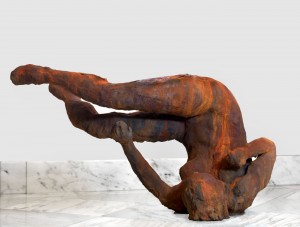 Ten Breaths: Tumbling Woman II is a second sculpture Fischl made in response to the events of 9/11. The original Tumbling Woman was unveiled at Rockefeller Center on the first anniversary of 9/11. A firestorm erupted around it and it was covered up and removed a few days later. According to Fischl, “The experience of 9/11, the trauma and tragedy was amplified by the fact that there were no bodies. You had 3000 people who died and no bodies, so the mourning process turned to the language of architecture.” That led to a question about how to grieve and how to memorialize. “Do you shoot up lights that look and imitate like ghosts of the building, or do the footprints of the building have to be preserved as sacred ground?” Fischl asked. Unlike the people we lost on 9/11, Fischl’s Tumbling Woman, remains with us, at the moment of impact—her skin a haunting shade of fire. – Eye Level, Smithsonian American Art Museum 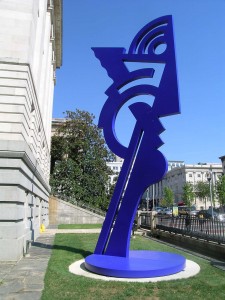 Modern Head stands thirty-one feet tall and is made of stainless steel painted blue. The sculpture is part of a series Lichtenstein began in the late 1960s that explored the idea of creating images of human figures that look like machines. This concept pervaded the artist’s work throughout his career.

In 1996, Modern Head was installed by the Public Art Fund of New York City in Battery Park City, one block from the World Trade Center. The sculpture survived the September 11, 2001, terrorist attacks with only surface scratches and was temporarily used by the FBI as a message board during its investigations. The sculpture was removed from the site on November 9, 2001, and after several moves, it is now installed on the grounds of the Museum’s main building at the corner of Ninth and F streets, N.W.

World War II Part 1: Crash Course US History – PBS (section on Atomic Bombs begins at 9:25) TV-G
This Crash Course video will teach you how the United States got into the war, and just how involved America was before Congress actually declared war. It will discuss the military tactics and weaponry involved, specifically the huge amount of aerial bombing that characterized the war, and the atomic bombs that ended the war in the Pacific.

From the controversial election in 2000, to the events of 9/11 and Bush’s prosecution of the War on Terror, the George W. Bush presidency was an eventful one. Crash Course will teach you about Bush’s domestic policies like tax cutting, education reform, and he’ll get into the wars in Afghanistan and Iraq.

Exploring all 19 Smithsonian museums is a great way to enhance your curriculum, no matter what your discipline may be. In this section, you’ll find resources that we have put together from a variety of Smithsonian museums to enhance your students’ learning experience, broaden their skill set, and not only meet education standards, but exceed them.

The Price of Freedom: Cold War – Smithsonian National Museum of American History
Americans led Western efforts to contain Communism. President Harry S. Truman ardently pursued a policy of containment, bolstering any ally—in Europe or Asia—who stood in the way of Communist expansion. And after the Soviets developed their own atomic weapon in 1949, Truman set a precedent for outmatching their nuclear arsenal. This online exhibition provides historical essays paired with primary resources.