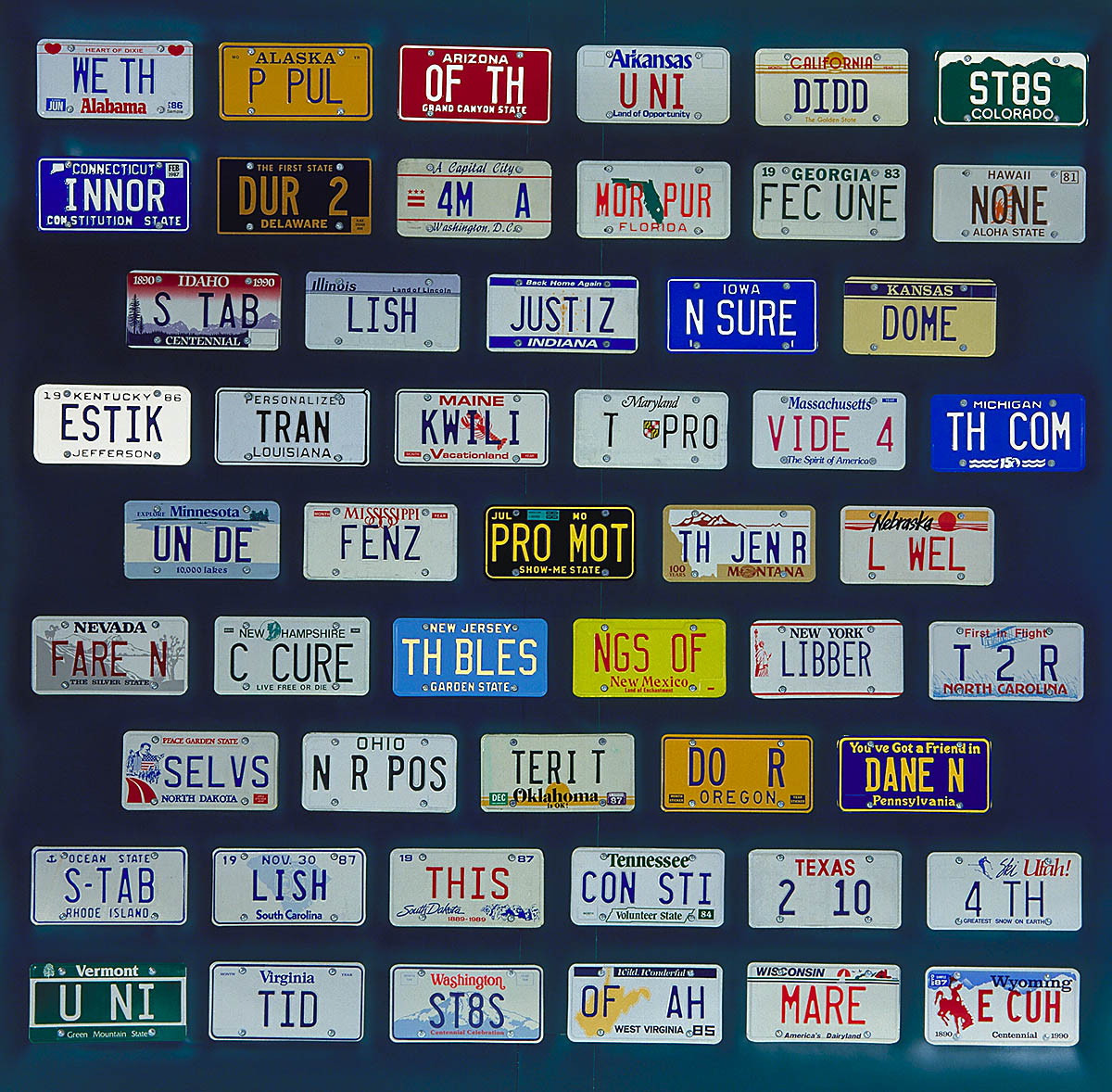 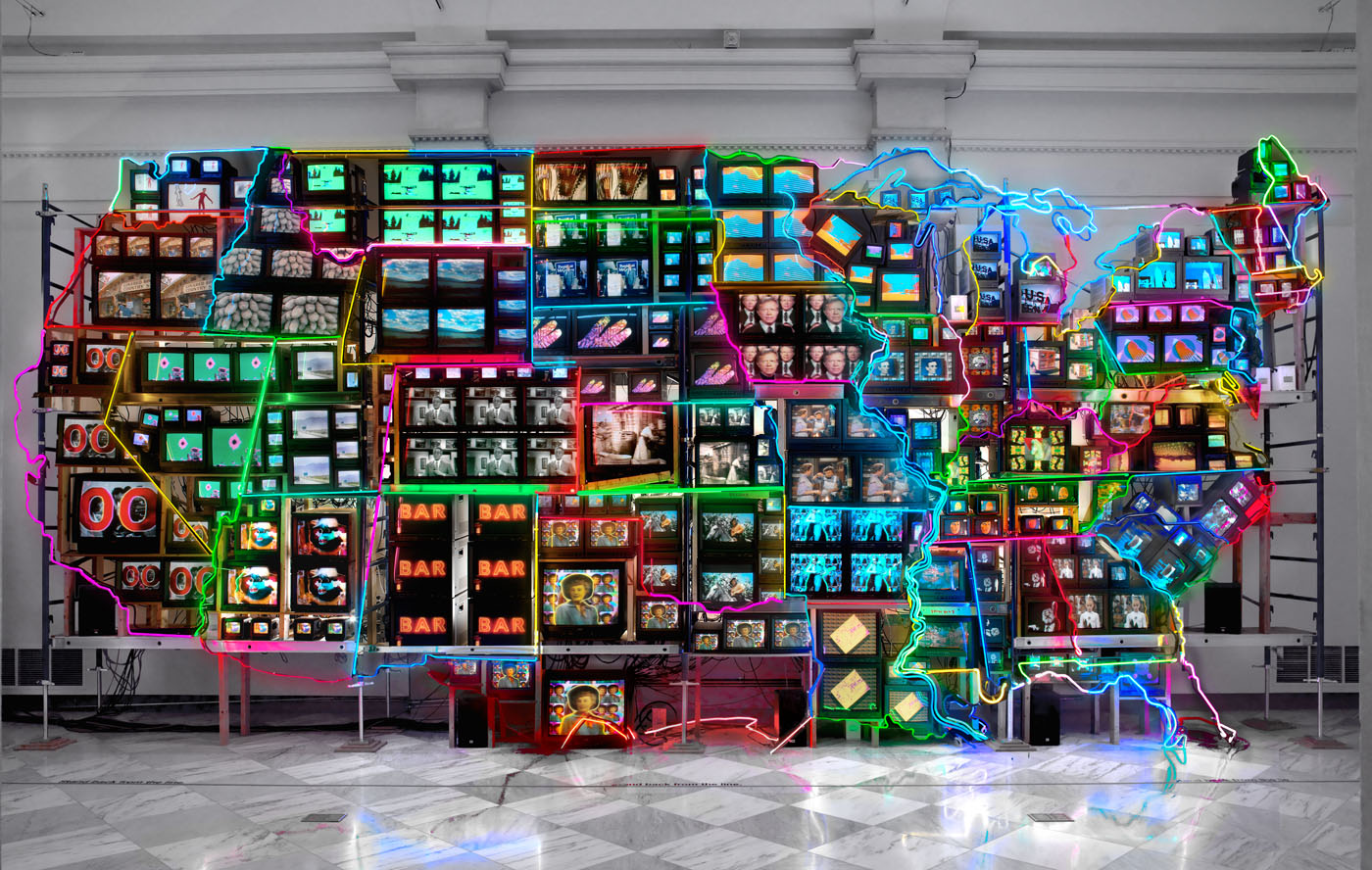 A major recurring theme in American history is the continuing struggle for e pluribus unum: “out of many, one.” amongst the debates of national versus group identity, group versus individual rights and multiculturalism. As our nation’s motto, e pluribus unum speaks of the union between the states and the federal government in order to form a single entity. The license plates, phonetically spelling out the Constitution of the United States, were merged together by artist Mike Wilkins in this artwork to commemorate the 200th anniversary of the Constitution. The chaos of constantly flashing television screens and bright lights all wrapped up in hundreds of feet of neon lighting creates the mixed media frenzy that is the art of Nam June Paik. Paik fuses the plane between the virtual world of television and the very real feeling of a broad expansive landscape of the United States. The artwork is literally composed out of many to create one, just like the license plates. Like Wilkins, Paik distinguishes between the individuality of the states by using different neon colors and images on the television screens representative of each state. An immigrant artist, Paik’s impression of the American highways was that they were roads of opportunity that connected the vastness of the country. Just as the Constitution is the paperwork that binds us as a country together, so too do the license plates and television screens serve to represent the individual states and literally come together as one to represent the whole of the United States.

1987 marked the bicentennial of the Constitution of the United States and artist Mike Wilkins was searching for “…something that was all-inclusive but that kept states separate but also knitted them together.” A plan clicked into place when Wilkins put the idea of the nation’s foundational governing document together with a mundane mode of expression: the vanity plate. Personalized license plates such as these criss-cross the country on state and Federal highways, blending national, state, and individual rights and responsibilities.

How did Wilkins put these license plates together to spell out the Preamble? How does this artwork tell a deeper story about our country?

Observation: What do you see?

No matter where you start looking at this artwork, you’ll notice rectangular license plates in their standard, 6”x12” size. Some quick addition would tell you that there are 51 of them; perhaps raising a question about that number.

As you continue to move your eye across the artwork, you might begin comparing these license plates. Colors pop out in contrast to the dark background: white, blue, yellow, green, and red. Some plates are quite plain with block text on a single-colored ground. Others, however, sport state mottoes (“First in Flight,” for example). Still others feature vignettes including cowboys, lobsters, or landscapes.All of the license plates display their state’s name but in a variety of fonts. Closer inspection would tell you that the plates are arranged in alphabetical order, Alabama to Wyoming. Look closer and you’ll see that all of the license plates are connected to the larger artwork with four bolts in the same location relative to the plate. Some, however, have tags dated to the 1980s. Their edges seem to dig a bit into the padded, vinyl background.

Zooming out, you’ll notice that the license plates are arranged in rows of fives and sixes. That 51st plate is due to the inclusion of Washington, D.C. Taking the whole thing in all at once, you might notice the letters and numbers embossed or imprinted on each plate. Reading the individual plates aloud, few make much sense by themselves. Although Hawaii and South Dakota do have recognizable words (“none” and “this,” respectively).

Starting at the top left, however, you’ll be able to sound out “We the people of the. . . .” to discover that the artwork phonetically spells out all 52 words in the Preamble of the Constitution.

Interpretation: What does it mean?

Looking closely at the license plates in Preamble, the names, colors, mottoes, and images depicted upon them highlight the individuality of each state. Their differences lend a unique flavor created by history and environment. The similarities among the license plates – the standardized size, shape, and bolt pattern – hint at two, intertwined concepts. First, and most practically, the license plates are mass-produced, mirroring the mass production of cars (more on that below). Second, and more abstractly, these standardizations link to the Federal system that keeps our states working together. State laws differ but they function within the larger framework of the Constitution.

Consider, also, that Wilkins might have ordered the plates by the date of each state’s joining the Union or some other strategy. Instead, by presenting them in alphabetical order, he has offered a more egalitarian approach: a roll call by name.

Finally, consider the artist’s choice padded vinyl cut into a square with rounded corners. For many viewers this choice of padded vinyl makes them think of drive-ins, diners, or car seats. The United States is a huge country with resources and population spread far and wide. In 1956, President Eisenhower approved the Federal-Aid Highway Act and provided a way for goods and people to zip back and forth across state lines. The Interstate Highway System has helped turn Americans into a car culture ready to heed the call of the open road.

“Us and Them” from Dress Your Family in Denim and Corduroy, 2004, David Sedaris – Grades 11 and up
Read it on NPR.org

“Us and Them” reacts to the nature of television as it permeates American Culture in the 1960s, coincidentally at the same time Nam June Paik arrives in the United States. Sedaris reflects on television’s role in the American consciousness through the reminisces of a ten year old version of the author. “Us and Them” offers a personal reflection and also provides a more direct criticism of televisions role within family life. Paik’s outlook is far more open-ended, and provides a reflection on the nature of American identity, and how that identity is colored by the technological revolution we have experienced through the second half of the 20th century to today. 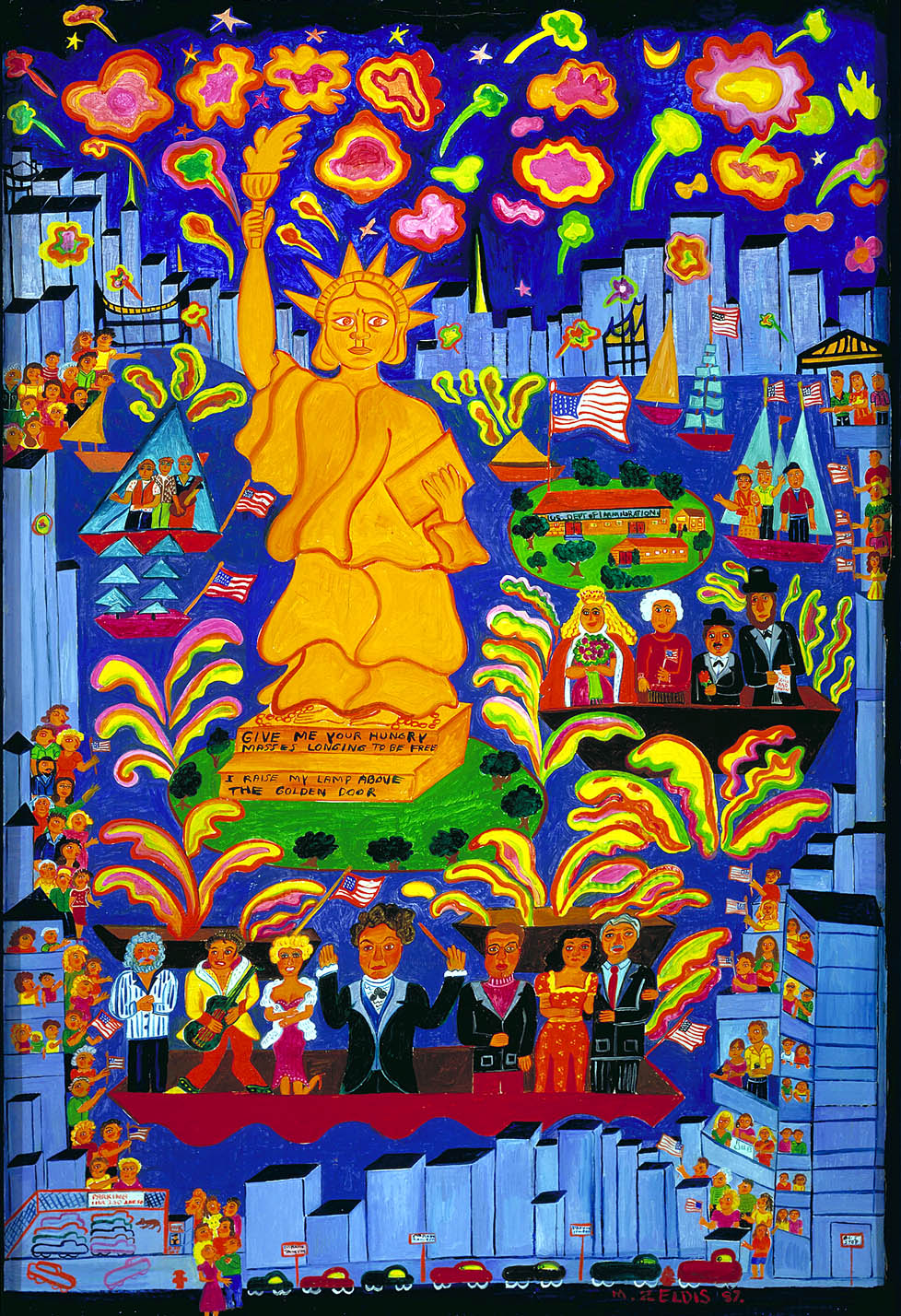 Malcah Zeldis refers to this painting as an “exultation of survival,” painted after her recovery from cancer in 1986, the same year as the centennial celebration of the Statue of Liberty. She includes herself (in the red dress at the lower right) alongside American icons like Elvis and Miss America in a celebration of liberty and life—personally from her sickness, and universally for the diversity of Americans. 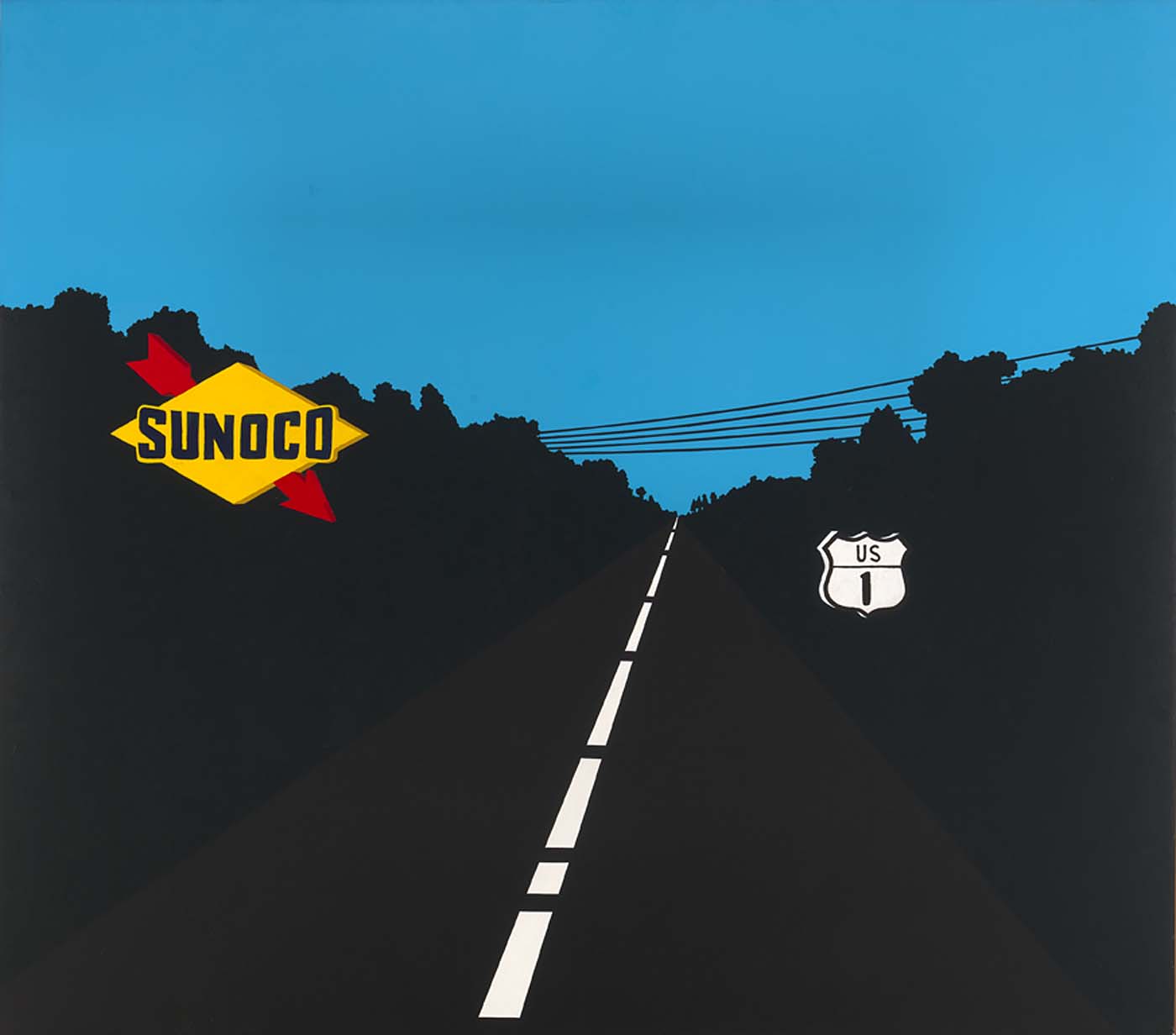 In 1962, D’Arcangelo embarked on a series of pictures depicting US Highway 1 on the East Coast. This painting was the first in the series, and served as inspiration for five similar works created between 1962 and 1963. Dark green silhouettes of trees flank the two-lane highway. The sky above is a solid plane of dark blue. The space is both flat and penetrating. Signs along the highway appear to float over the road as if time has been suspended. This surreal, almost dreamlike quality indicates a major difference between D’Arcangelo’s conception of the highway and road imagery presented to the American public by writers such as Jack Kerouac and photographers like Robert Frank. The latter see the road as a place where things happen, where rites of passage occur and stories unfold. For D’Arcangelo, the road is a place without time and without characters—just the hypnotic repetition of road signs and billboards and the forward motion of the car.

Teaching the Constitution (3 min) From The Gilder Lehrman Institute on Vimeo.

Defining the Constitution (2 min) From The Gilder Lehrman Institute on Vimeo.

Exploring all 19 Smithsonian museums is a great way to enhance your curriculum, no matter what your discipline may be. In this section, you’ll find resources that we have put together from a variety of Smithsonian museums to enhance your students’ learning experience, broaden their skill set, and not only meet education standards, but exceed them.

Nam June Paik: Global Visionary  – Smithsonian American Art Museum
Offers an unprecedented view into the artist’s creative method by featuring key artworks that convey Paik’s extraordinary accomplishments as a major international artist as well as material drawn from the Nam June Paik Archive, which was acquired by the Smithsonian American Art Museum from the artist’s estate in 2009.